When we first took on the Halfway House garden in Glenside, the only native plants obvious to us were self-seeding ti kouka (cabbage trees) and poroporo.

An early settler had planted a rectangular paddock boundary to the east of the house in pine trees and macrocarpa, most of which had died of old age. We left their stumps as they were, standing and fallen, as this represented what the land would have looked like after the original native bush was felled and burned. Rotting stumps also provide a habitat for insects.

The native plants in this list below, are grouped how we have used them. Each plant is listed in alphabetical order with their Maori name first, followed by their Latin name and their common name.

You can use our planting guide for restoration planting beside the stream or alternatively refer to two very useful planting guides published by the Wellington Regional Council which are:

The plants in this group are ideal to plant beside streams in the area between Johnsonville and Porirua. They were chosen for their small leaves and filtered light, so as not to block the sunlight of the neighbours. They were also chosen for their ability to stabilise the stream bank and provide a habitat for eels and other native fish. We start planting from beside the stream bed and work our way out. The first plantings took place in 2004.

On the edge of the stream

Native grasses like carex secta provide a habitat for fish to lay their eggs and a shady hiding place for eels. Fish eggs stick to the grass and when a flood, or fresh washes through the grass, it agitates the eggs and they hatch.

This is a great tree for holding the stream banks firmly. Flax is not useful beside the stream in our locality as it washes out when it floods, taking the bank with it. Furthermore, when flax washes out, it tends to block the stream channel resulting in erosion and flood impacts. Flowers in early summer with berries from mid-summer to mid-autumn. Food source for bellbirds and tui

On the sloping bank, or in from the edge of the water

Ti kouka holds the stream bank and provides food for native kereru bird. It has a nice sound of strappy leaves clapping together in a breeze. Drops its leaves, which makes great mulch and suppress weeds.

Pretty leaves coloured light green changing to wine red in autumn on one side and fawn on the reverse. Clusters of tiny red flowers forming a larger flower head. Drops its leaves in winter leaving red coloured branches. A very fast growing semi-deciduous tree. Fruit was eaten raw by Maori and liquid from boiled leaves was applied to skin ailments. Makomako likes open sunlight and is frost hardy. The flowers and berries provide food for tui, kereru, bellbird and waxeye from spring to early summer. Plant a metre from a fenceline and a couple of metres from the stream edge.

Frost hardy, likes open sunlight. Can be planted as close as a metre to the stream edge. Grows fast up to 15 m tall. Good for fast cover and quick height. Loses leaves in winter showing its interesting tangled branchlets. Great for holding the streambank soil.

On top of the stream bank 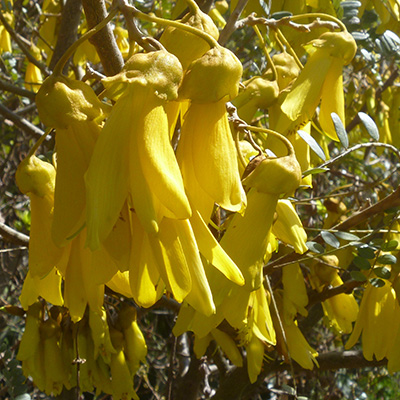 Small fine leaves with bright yellow flowers in spring full of nector, which attract the tui and bellbird. A great garden specimen which grows up to 10 metres tall.

The berries, which are drupes the size of an oval plum, are poison if eaten when yellow and unripe. In the early days, settlers made jam out of the ripe orange berries. Good bird food. Pretty mauve flowers. The leaves are poison to animals and we keep this plant away from the horse paddock fence-line.

We selected these shelter plants for their mid-height, their fine leaves which filter sunlight, and their hardiness in the wind. They provide a filtered screen to neighbouring properties and provide light, not dense, shade. The first manuka went on the native plant mound on the west of the flower bank in 2017. This was followed by cabbage trees over the eastern side of the garden fence on the stream bank in 2018 and the main planting along Twiglands fenceline and on the eastern edge of the lawn took place in 2019.

This is a shrub to small tree growing up to 6 metres tall. Tough hardy plant in wind and dry banks. It has pretty crinkly leaves, lime yellow on the top and silvery on the underside.

There are three different types of lacebark hoheria. This is a great tree for the garden, with lacy like leaves and masses of sweet scented white flowers smothering it all summer. Attracts bees, butterflies and is a host to the native puriri grub, which transforms into New Zealand's largest moth. In the old days, the lacy bark was used to decorate ladies hats!

Hardy tree growing up to 15 metres tall. Withstands wind, frost and relative dry. We used this for height, with lower growing manuka and rangiora beneath.

Grows up to 8 metres tall. Has pale green leaves which undulate (they curl, like a frill). The tiny flowers are a soft dark purple red to black with bright golden stamens. Scented foliage and a great greenery for flower arrangements.

Fast growing, frost hardy. Grows up to 4 metres tall. Masses of white flowers in summer, sprinkled all over. The insects that pollinate manuka are attractive to fantails and other insect eating birds. Bees love this plant from which manuka flavoured honey is derived. Great filler plant growing in damp areas and on dry banks.

Small shrub or tree growing up to 5 metres tall. Has wonderful shiny bright crinkly leaves in rich crimson and green colours. We use this plant for its resilience and to bring colour to the garden.

This medium sized shrub has large soft leaves the size of one’s hand. The silvery grey underside of the leaf was used to write on by early settlers wanting to send messages to each other. Rangiora grows well in Glenside, with cream yellow sprays of tiny flowers from late winter to mid-spring. Great for clay banks. 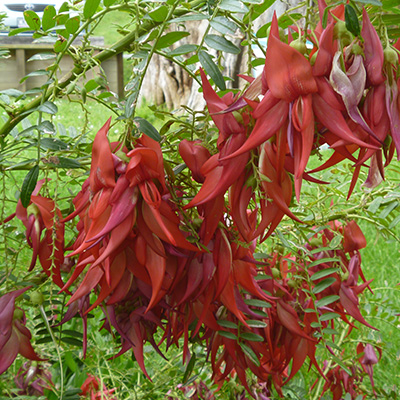 Has a bright red flower similar to a kaka bird's beak. Grows up to two metres high. A great shrub for the garden. Not native to our locality, however favoured by early gardeners as a speciman plant for its beauty and novelty. There is another type called clianthus puniceus, which is smaller and a lighter red. Very few plants are growing in natural conditions in the wild. The seed for our plant was originally harvested years ago by botanist Olaf John and donated to the Otari Native Botanic Garden. Olaf planted this descendant at the Halfway House in 2018. He lived in the house from 1954-1956. 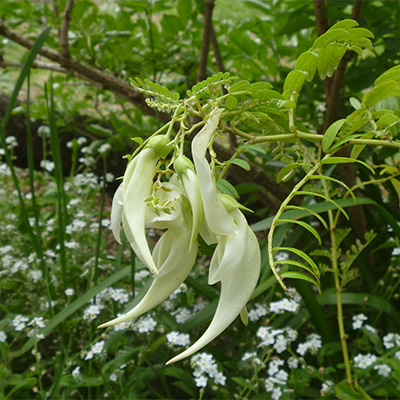 The last known natural habitat of the white kaka beak is the Tiniroto cliffs near Wairoa, where they had not been seen in the wild since the 1950s. According to the Endangered Species website, the white-flowered kakabeak was saved from extinction when a jar of seed left
in a gardener’s shed was discovered to contain kaka beak seed, which on being grown turned out to be the 'lost' white-flowered form. In 2015, 100 white kaka beak, raised by the Crown Research Institute, Scion, were returned to Te Reinga, in the Wairoa area. Our plants were gifted by Olaf Johns, in 2018. Olaf lived in the house from 1954-1956. 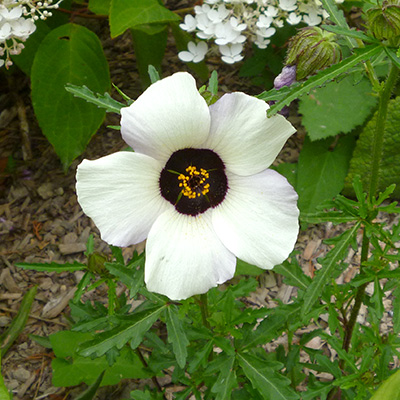 There are three hibiscus growing wild in New Zealand. Two are considered true natives, Hibiscus richardsonii and Hibiscus diversifolius. Hibiscus trionum has been in the country for a long time it was considered a native however more recently it is believed to be a true native of Africa.

This is a strappy leaved plant good for growing in dry shady places under trees and shrubs. It is a "plant me instead" alternative to the invasive introduced agapanthus plant. The rengarenga has spires of beautiful white flowers.

Nine totara were planted along the driveway in 2018. Totara was chosen for its longevity, height, wind resilience, and shelter. The totara closest to the carpark was driven over by a visitor by accident and a replacement was planted in 2019 by park ranger Denise Clements. Totara was the predominant tree in the area before the bush was felled. The ridgeline, where the road goes from Johnsonville into Ohariu, is marked on early maps as Totara Ridge.